Beachy Head and the Seven Sisters under snow

Home/Beachy Head and the Seven Sisters under snow
Previous Next

Beachy Head and the Seven Sisters under snow

‘WELCOME TO EASTBOURNE: THE Sunshine Coast’, proclaims the sign at the railway station, and indeed the town is one of the sunniest in the country. Facing east and sheltered by Beachy Head and the South Downs to the west, it often basks in the sun, when both the hills and areas not far inland are under cloud. But today was a different story with the so-called Beast from the East having arrived blanketing the country in snow, leaving Eastbourne sulking beneath leaden skies. Icicles hanging off the undersides of cars and a beach carpeted with snow are rare sights here. 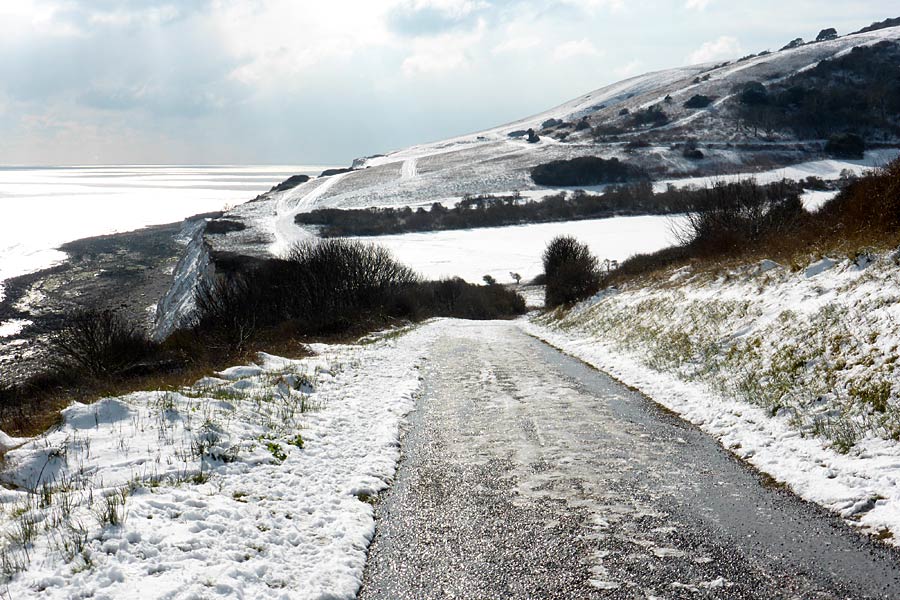 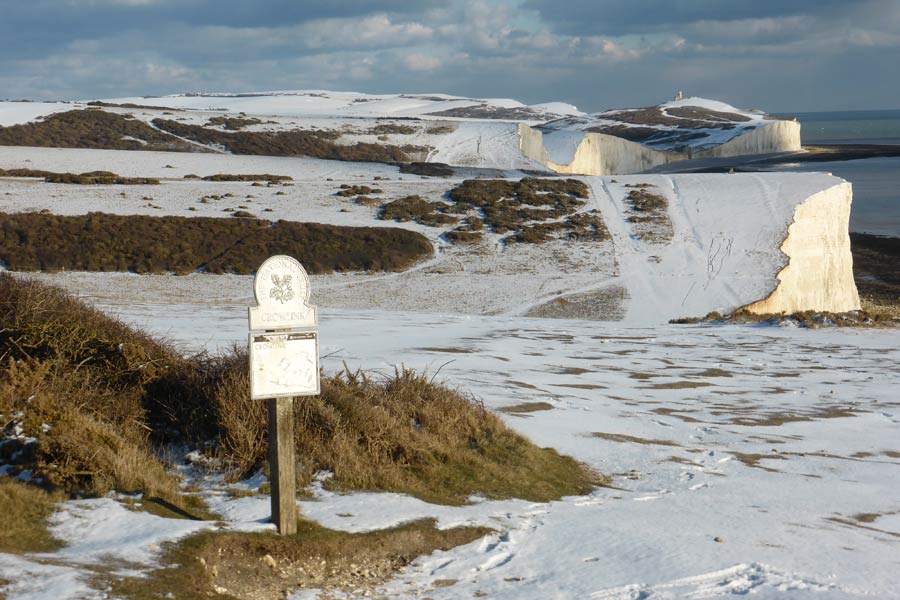 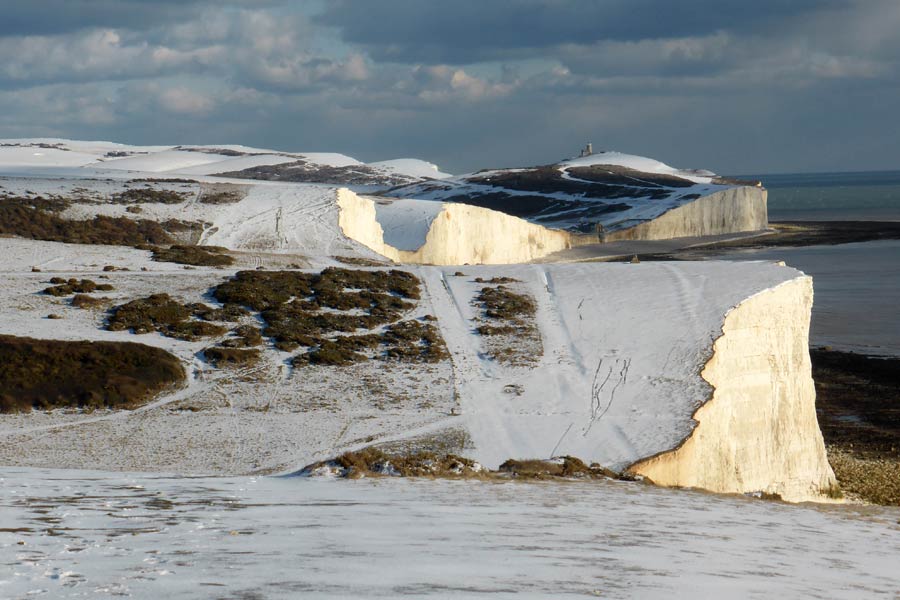 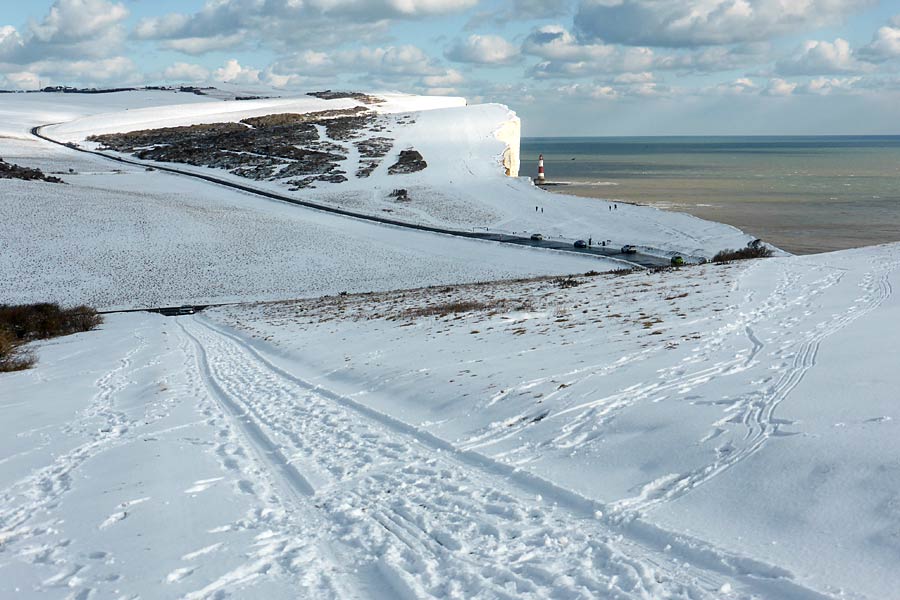 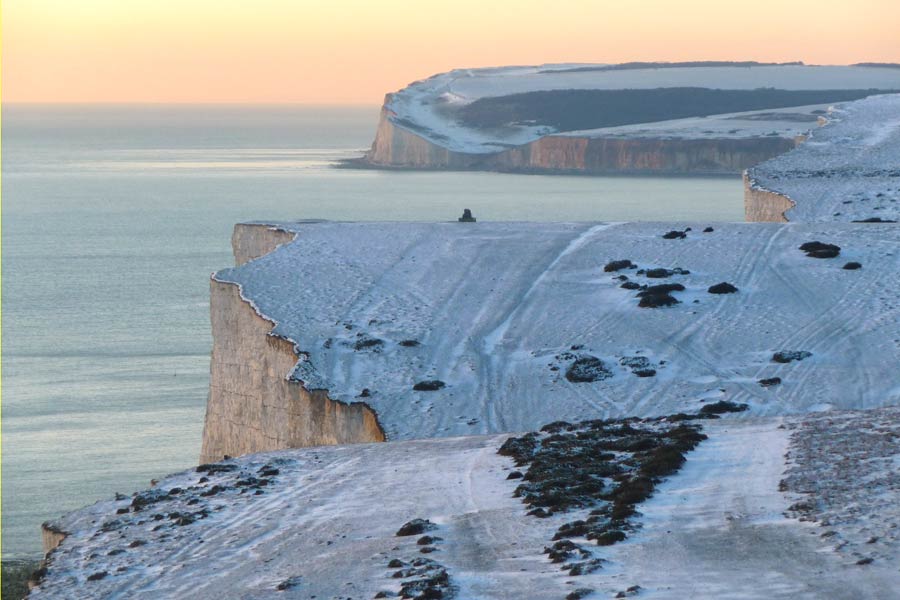 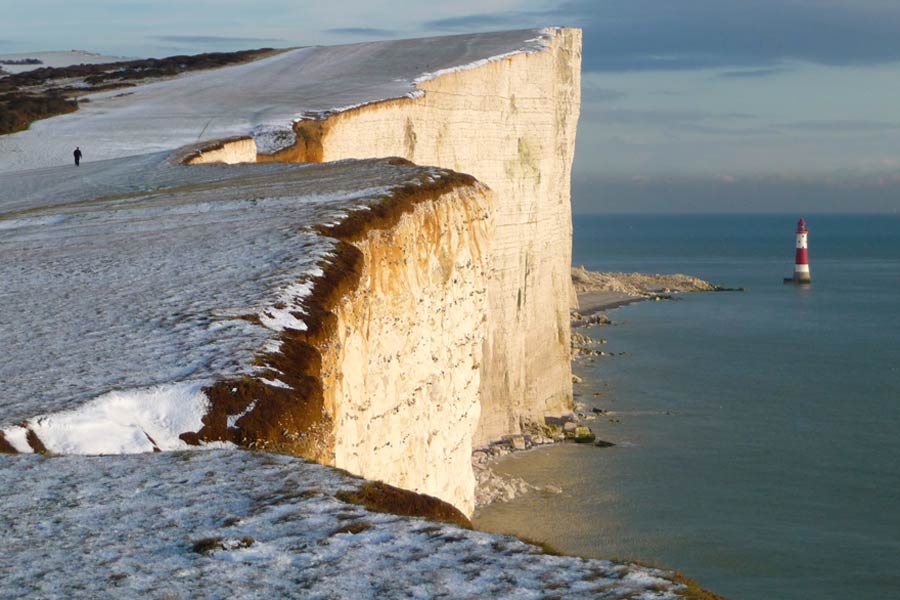 It was my birthday (late February – thank you for asking) and I was keen to walk the chalk cliffs while the snow was still lying, for it always goes first along the coast. Heading along the near-deserted promenade towards Beachy Head, the sky looked a little brighter in the west, which was encouraging…. From the foot of the Downs above Holywell the South Downs Way heads straight up, but I prefer to stay closer to the coast following the cliff-top path, although it’s a steep climb directly to the top of Beachy Head further on. The gradient and icy conditions beneath my feet made this a little tricky, but stopping to don my trusty Kahtoola microspikes (which, thankfully, I’d grabbed and put in the rucksack at the last minute) wasn’t practical until I reached the top.

Today was a different story with the so-called Beast from the East having arrived blanketing the country in snow, leaving Eastbourne sulking beneath leaden skies.

One of the benches adjoining the Bomber Command memorial situated up here on the headland provided a suitable stop, and the chance for a moment’s reflection (too cold to linger for long). The monument was installed in 2012 in tribute to the 110,000 aircrew of the RAF’s Bomber Command in the Second World War, over half of whom lost their lives. Many of the missions departed the country over Beachy Head. As the inscription says, ‘for many it would have been their last sight of England’. There’s added poignancy for me, since I knew someone who was one of their pilots, and recalled how he often acknowledged how lucky he was to survive.

Surviving the cold was the challenge today, with bitterly cold temperatures and a biting wind. I was glad to have brought two pairs of mitts, but even so, removing them every time to use the camera was a painful experience for my fingers (which, like my toes, always suffer in the cold). But with the landscape transformed as it was, enhanced by some blue sky now overhead, it was a photo opportunity not to be missed. I passed one or two folk on the way to Birling Gap, but thereafter there wasn’t a soul to be seen along the Seven Sisters. The spikes were invaluable on the icy slopes.

The snow petered out as I reached the Cuckmere valley with green fields beyond. For the final leg of the walk, I headed up to Chyngton Farm to enjoy the ever-cheering sight of the lambs with their mothers out in the fields (lambing starts in early February at the farm), and then on up to South Hill and along the cliffs back down to Seaford for a train home. A birthday walk to remember.

This article first appeared in The Great Outdoors (TGO) magazine in February 2019, and is re-published here with the author’s permission. Copyright © Fiona Barltrop 2019. All rights reserved.